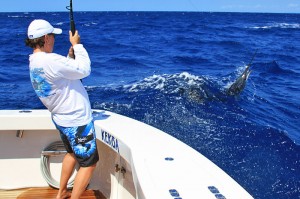 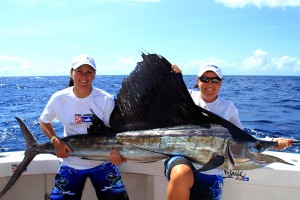 Suzie helps Talina hold up her sailfish for a quick snap

KEKOA started its light tackle season yesterday on Day 1 of a three day trip from Cairns to Townsville where we will be based for the next few weeks through the Townsville Billfish Challenge on September 2-7.

15 minutes after lines in as we cleared the green zone on the south of Cairns, a hungry sailfish popped up behind the teaser and Talina successfully switched it onto a gar to mark her very first sail!!! Although she has released plenty of marlin, juvenile and heavy tackle black marlin in Townsville, and striped marlin at Port Stephens, she has been unlucky with sailfish, forfetting her time on strike on many occassions thinking it was a marlin behind the bait. But yesterday there was no mistake!  Bucket list item checked off – KEKOA delivered again!

Meanwhile Suzie was kept busy with the mackerel and tuna including some great big marlin baits for later in the season but some tasty Spanish mackerel as well.

We ended up going 4-3-1 on the sails, raising one that wouldn’t hookup on a lure on the rigger, jumping one off and breaking the line on another bigger sail. A good trip with the all girl crew firmly outnumbering Capt. Luke. Talina and Suzie on the rods, Kelly on the camera and gloves, and Capt. Luke looking on.

Read about Talina’s fishing in the Townsville Bulletin newspaper. 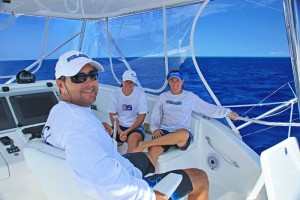 The Captain with all girl crew (Kelly behind the camera) 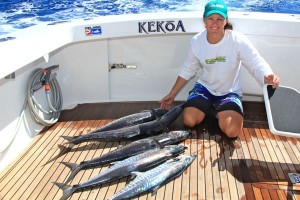 Suzie and some the Spanish mackerel