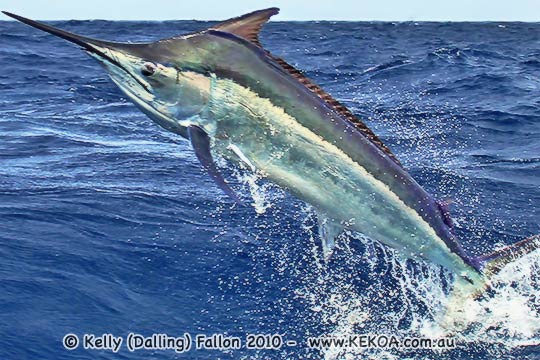 Greg and Graeme joined us on what turned out to be another stormy couple of days in November. Both have fished in the north before and had plenty of big fish tales to share from their fishing adventures. Graeme is also a keen fly fisherman and spends a lot time time seeking out marlin on fly in the west and showed us some pictures of his fish with Ross Newton and Tracey Rushford on Reel Teaser.  With Greg’s recent knee surgery giving him a little grief in the sloppy conditions, Graeme was first in the chair for what seemed to be almost the only fish released at Linden Bank that day. It gave him a hard time early before popping up for beautiful full body jumps on the leader – almost as if he was posing for these pics.

The gents were celebrating Greg impending retirement but perhaps didn’t expect celebrations to be this wild!  Another squall came through and things got a bit hairy forcing us back into port earlier than planned on Day 2, but not before we added another nice yellowfin to the tally.