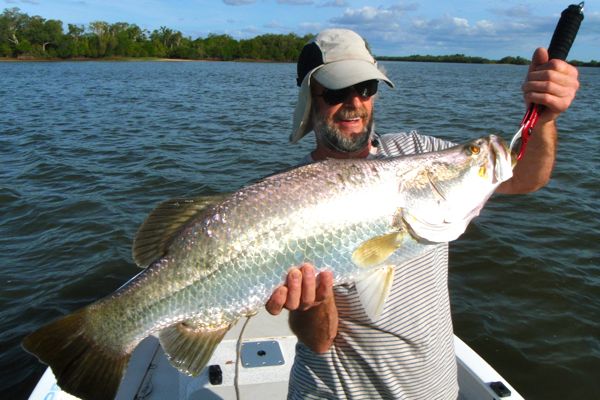 Day 1 – Despite coming from the cold of Tasmania, several of the boys have been barra fishing before (although I think yesterday was a first for Will). And Garry got his biggest ever barra yesterday despite having fished the Gulf on more than one occasion before on the likes of the Daly and East Alligator etc. It started off well with a triple header on the troll on the rock bar for Garry, Peter and Luke and continued pretty steady all day. The snags were producing good fish and a lot of fun and games as well. Check out Eddie’s pink buff. He has pink crocs to match!

Breaking up the week the boys spent a morning fishing the Love River (lots of jokes about that) where Garry got the biggest fish of the day – a nice jewie!  Back on the barra, Luke pulled off the biggest barra of the week with a 97cm model but there were plenty of other good legal fish which kept the resident grouper full of barra frames hand fed to him at the back of the boat from fish we brought home for the dinner table.

The guys finished with just on 175 barra for the four days on the river and almost scored a sailfish for Will on the way home.  Unfortunately the atrocious conditions (nothing like Tassie though when its blowing hey guys!) meant that we couldn’t spend too much time on the hot spot and had to continue to troll down sea.  Another great fun week!