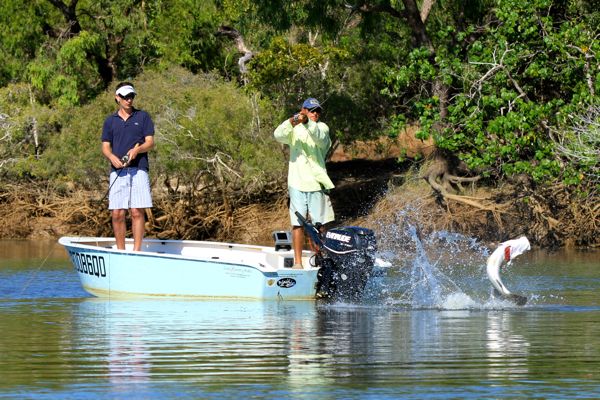 Joe has never been barramundi fishing before, but he looked forward to this trip so much that even the prospect of coming solo did not dampen his enthusiasm. More fish for him! And the barra’s haven’t disappointed with the experience rivaling chasing the giant black marlin. After Day 2, his current PB stands at 88cms and he’s still chasing the elusive grander, I mean 100cm. All the fun is in the chase!

Day 1 we covered some miles and saw some great country and caught some quality fish. Day 2 was all about the numbers finishing with just on 100 for the day, the biggest at 92cms and the founding of another new spot we called Calizone – after our lunch.

As is the way, we’ve been too busy through the week to keep up with the reports but I’ve been adding photos. Another highlight has been the naming of a second new spot as ‘Houdini’ – where the barras do their tricks and get away. Lots of quality fish were caught finishing with just over 300 barra for our four anglers for the week. Fittingly, Joe ended the trip on a high with a 75cm barra at Squid’s Snag.  Another great trip!

While we’ve been waiting for the tide to go out to fish the drains, we’ve been having some pretty good…

Good things come to those who wait!  After a couple of days of tougher fishing than last year, Eddie and…

After weeks of pretty strong winds, this week was a dream with glamour conditions on the water from the start…

A few days into our first official trip of the season and the boys are already sparring. Is it size,…

Scotty, Glen and Jason from TAS and Vic from VIC are back on board again this week and have been…

Glen, Dave, Chris and Brett join us this week from Tasmania – and the first day on the water yesterday…