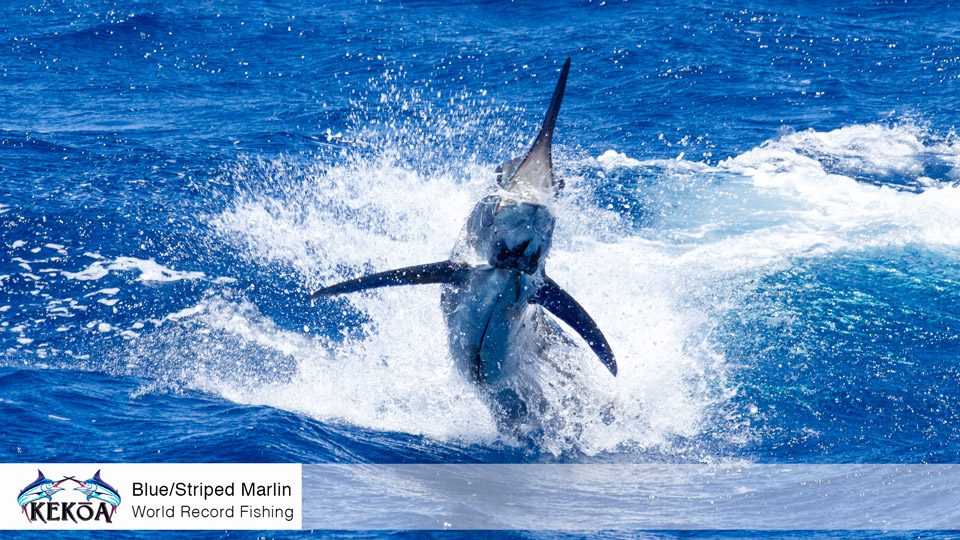 This is a recap from our World Record Chase with Gary Carter in November 2017 off Fraser Island. I still have many more recaps from both our Cairns giant black marlin and Fraser Island fishing seasons to come so stay tuned! (Kelly)

The first day was pretty lumpy so we elected to stay in close and try for a black on 1kg. The first fish jumped all over the place but wasn’t hooked (line through the mouth). Soon after we were hooked up to a second fish. It did all the right things and we were able to get it in the boat after a 17 minute fight. The records need to be weighed on land so we were lucky enough to find a group of fisho campers just inside the spit to help us.

It was pretty hilarious how it all unfolded. Ben drew the short straw and jumped in and swam over to ask if they could help. We borrowed their kayak to transport myself, Gary, the fish, the scales (and Ben again) separately back to shore. The shore break and pumping current made the kayak in an adventure and I saw them all hold their breaths when I got a ride on a wave approaching with speed – but its not my first rodeo lol #nailedit

The fish weighed in at 14.5kg on 1kg line which is a pending Australian 1kg black marlin record and should be the first as well. It weighed pretty spot on what we estimated according to the measurements which I wrote down and gave to Gary so don’t have on hand oops!

On our way back out to KEKOA, the guys came up with an ingenious plan to get the kayak back from the boat – the HT harness fight retrieval. Hilarious watching the guys ‘fight’ the kayak again and again for each trip.

Thanking them so much for all their help though we left them with some #pelagicgear and after taking some marlin fillets for ourselves, the remaining fish (which they planned to cut up and use as bait!)

Gary had a great chat with a couple of guys as we were getting it all together. No doubt they weren’t really expecting a game boat to pull up with such a weird request. It was a great camp spot, but oh the FLIES!!!

The final pic is the sunset shot as we were still motoring in to our anchorage further along the island (and out of the current). Big Fraser days!

Fishing the edge – blues and stripes

The rest of the week we fished the edge. Traditionally we would say heavy tackle but we weren’t even close to heavy tackle! We did put the 1kg away and were pitching 2kg, 4kg (predominantly these two) and 8kg depending on size of the fish we raised – Luke’s call what to pitch.

Here are some (I didn’t do all!) of the daily recaps. It was hectic! The number of fish raised on the teasers and seen each day was truly world class fishing!

– Raised 7. 1st bigger blue, switched it and took bait with a high speed going away bite then dropped it. Teased it up for another bite this time squeezed it off. 2nd blue climbed all over teaser, still switched it but it dropped the bait, then bit miss bit miss bit miss bit miss just high speed fake passes. 3rd doughy tease didn’t switch. 4th teased & switched a blue, got the pile on bite and had the fish greyhounding away, break line in total freespool on 4kg! 5th no switch just looking at both teasers. 6th no switch. zoom in. zoom out. 7th raised on teaser gone in a flash.

– Line parted ways on 5 blues and caught a just sub-70k striped marlin on 4kg (Christmas smoker!). Fought this fish twice, the first time on 2kg which is the one we wanted it on but couldn’t get retied in time to pitch again when it came back up.

– Raised 6. Blue bigger fish no switch, blue did donuts on the bait but no switch, ditto, blue flash gone flash gone switched and then came leaping at us, blue no switch, striped marlin, the right one, fought for 10 mins but bait came loose.

– Raised 6. Switch 1 on 4kg, chase fish breaks line and jumps off over horizon, tease no switch x 2, blues on both teasers no switch. Tease no switch.

Huge thanks to Gary of course as well as Divan and Ben – you guys are amazing! 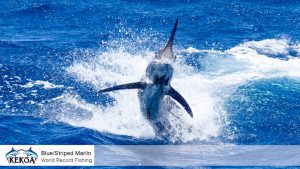 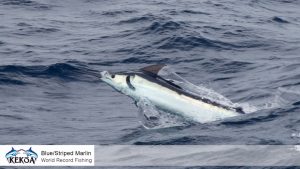 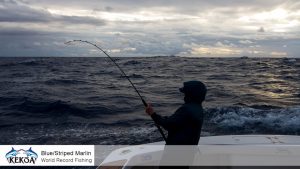 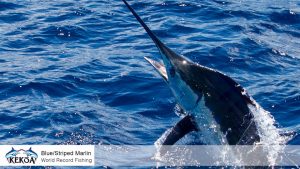 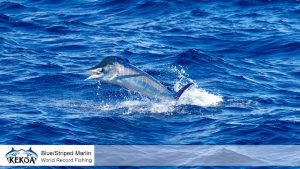 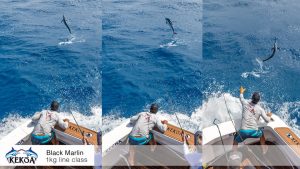