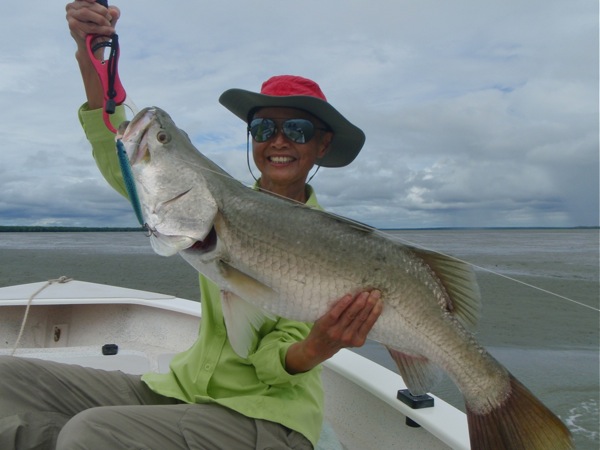 Eddie and Jeannette Shi join us on board KEKOA this week for their second year fishing the Ducie River.  Eddie and Jeannette have spent several years fishing the Archer River to the south of Weipa but put the Ducie on their wish list for this year because they enjoy the variety of fishing on offer.  On Day 1 lines in, Jeannette has streaked to the lead with this 78 cm barra.  Let us hope there are plenty more of this caliber out there!  Its nice to be back.

While they have been steadily picking away at the fish, including putting in a good afternoon session on the drain on Wednesday, it was Thursday morning when the fishing really hit its stride and showed just what the Ducie is capable of – 100 fish between the two boats in just under two hours of fishing.

Eddie and Jeannette wanted to fish the whole boat themselves this year and so for the morning session, Dan and I have been going along as camera/scout boat before leaving them to it with Capt. Luke for the rest of the day.  But there wasn’t very much photo taking going on at all this morning with both boats finding separate pockets of fish and non-stop action, and recording straight to the Go Pro.  Luke’s footage of Eddie and Jeannette is below.  Kelly and Dan’s to come.

All taken on one set of snags..

Well done Jeannette, putting the pressure on from day one! Nice Barra!
Looking forward to hearing more news from your time aboard! Enjoy!