Week 3: Putting the Sport in Gulf 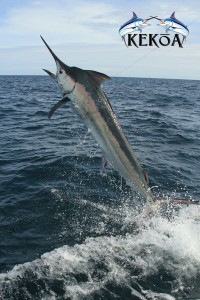 Kevin's marlin does a happy jump

We’ve had a great start to Week 3 in the Gulf with KEKOA owner Scotty Taylor on board.  Accompanying Scotty on this trip is Glen, Tasmania’s best publican, Kevin (Clarky) and Vic, from VIC.  Upon arrival Tuesday afternoon, we whisked the gents down to Boyd Bay for the night (waking up to another beautiful sunrise along the red cliffs) with the plan to spend Wednesday sport fishing our way down to Aurukun.    So after a leisurely start, we made out way out to a few miles west of Pera Head aiming to catch a few mackerel and tuna for the boys, and maybe even a sailfish if there were any around.

Well, we didn’t see any sailfish, but the teasers had only been in the water for 20 minutes or so when Capt. Luke called out that there was a marlin up on the teaser, a nice black around the 60kg mark.  While our garfish were intended for the sails, and seemed a little small for this guy, we managed to switch him onto it, and Kevin was hooked up to his first marlin, which can now claim the title of the most photographed marlin in the Gulf of Carpentaria. I got plenty of photos of his happy jumps before we were able to bring him in close for the release, much to the relief of Kevin who was well and truly puffed at this stage after a hard fight on the light line.

Not even five minutes later again, Capt. Luke’s shout alerted us to another marlin on the teaser and we switched him onto the gar again and Vic was hooked up this time to another black marlin about the same size. Unfortunately, this guy spat the hook after about 10 minutes after giving us an energetic show in the air.  We also raised another two marlin, one that Capt. Luke put at about 200lbs but were unable to switch due to the fact that a member of the mackerel razor gang sheered off the gar’s back end right in front of the marlin’s nose!  What a lot of fun and a great results for Kevin’s first fish!  We also had a lot of fun with the tuna and Spanish mackerel which were a hit with Capt. Luke’s famous beer batter for dinner last night.  Glen and Vic also fought a couple of nice GT’s putting us at something like 6 species for the day!