From the Captain himself!  A recap of KEKOA’s 2015 barra season in the Gulf of Carpentaria:

We left Cairns the day after cyclone Nathan crossed the Far North Queensland coast making our passage relatively calm and an easy trip to Horn Island to pick up Rob and Rob. We also had a quick catch up on the way through with our friends stationed in Seisa where we enjoyed a big feed of fresh crayfish and prawns.

With the wet season relatively non-existent in the north again this year, I was in two minds as to how the season was going to shape up.  These rivers really need the big wet to continue the cycle of life, so when it doesn’t eventuate (and it hasn’t for several years now) its always just was a matter of going fishing and seeing what we can come up with. And so we did – although we did have one small advantage over the fish this year, our two CrossXCountry tenders were newly armed with Raymarine’s new side-scan units.

The weather at the start of our season was pretty kind to us with mostly light easterly winds that dropped out in the afternoons – making for perfect surface fishing conditions which we certainly made the most of.

One particular session with one of our new guests Scott and crew, I found a school of barra, in excess of 100 fish (!) all feeding on the surface like a school of tuna. This was an incredible sight to see but also made for very frustrating fishing as the fish were feeding on small bait and hard to get to bite. We only managed a dozen in the short time they were there for, but at least they were good size and I knew where they would be tomorrow!

Luckily for us the tiny bait didn’t come through the next day but the barra certainly did and we were waiting with our surface lures. Needless to say we smashed them up pretty good that day! 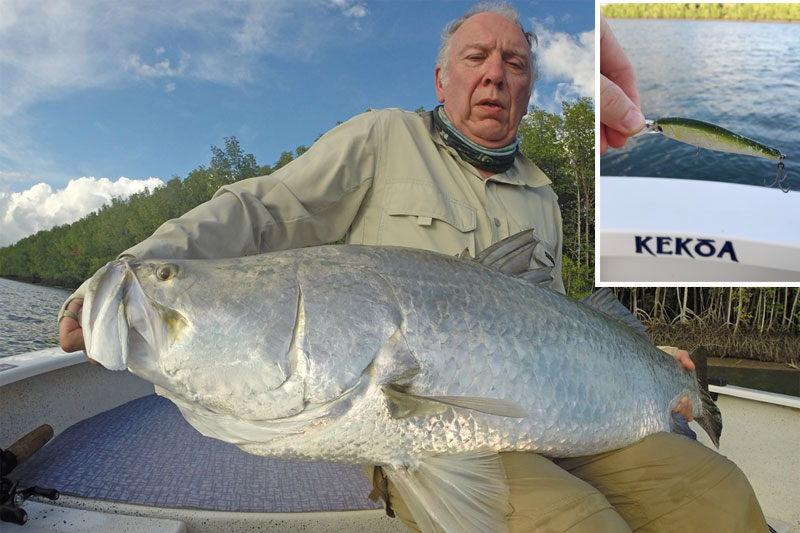 Our biggest fish for the season at 110cm was caught on one of the smallest lures we used this year. A virgin barra fisherman (Dave) from the UK caught this ripper on a 68mm lure. It came at the end of another great session casting at some lay down timber.

The session was over and late in the afternoon so time to head back to KEKOA. As I drove away from the area I marked a couple good fish on the side scan so lures were quickly deployed for a quick troll. First pass and Dave was on. A tense 15 min later his 110cm barramundi was laying on the brag mat, and photographed and quickly and healthily released.

(If you want to know just how tense, take a close look at the hooks on this lure!)

This will be one day that Dave won’t forget, also releasing an 87cm earlier in the day after a epic battle on the flats.

We also had another new group join us in 2015 with Col and Kylie one of the first trips of the year.  We’ve never fished with Col and Kylie before but we’re already planning the next trips. We all had such great time and it was a really good introduction for them with Kylie getting her introduction the most up-close-and-personal that you can get.  Misjudging the edge of the boat Kylie took an unscheduled swim in the river but was an absolute trooper and simply climbed back in and kept casting. Kylie and Col didn’t get any fish over the magic metre mark on the trip (while we definitely have great quality fish on these rivers, and plenty of them, we don’t get as many over the number as they do down in the southern Gulf), they did get several nice fat ones to 92cms.

While there were  a couple of new faces there were plenty of familiar faces as well. Mike Carney and his Toyota team joined us again with Nigel joining the regular Weipa crew for the first time.  Arthur backed up second year in a row to win the biggest barra honours. But it was the biggest other species that gave the boys the most fun.  Several big queenies put the hurt into the boys with Corey landing one over 120cm, and absolute cracker for so far up the river! 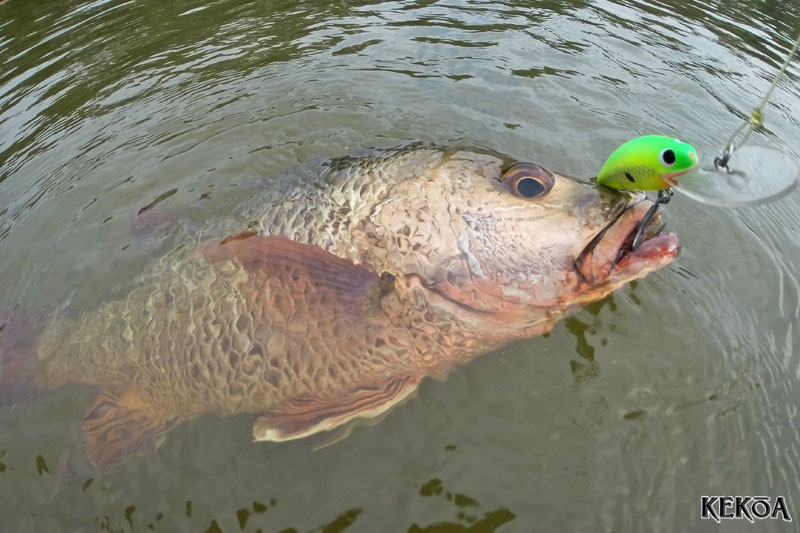 Matt Wright joined the KEKOA team halfway through the season giving Kelly, who headed home to Cairns, a well deserved rest. He had pretty big shoes to fill in the galley department as Kelly culinary skills onboard are pretty hard to match. He had a week with Kel to learn the ropes (or utensils so to speak!) but he did a great job keeping out bellies full and gave us someone to ‘rib’ on origin night being the only cockroach on-board. We were always going to struggle with the IT side of things with Kelly away (getting photos off camera’s and to Kel) and Kelly really has no rivals among us in the technology department, but between Matt, Donny and myself I think we just scraped through.

Our good friend Max from Coffs Harbour almost ended up being part of the crew for a couple weeks. Bringing a group of his regular bass fishing mates one week and then his crazy sons and mate John for there second year in a row Max was on board for 14 days!

Both of these weeks saw some great fsihing catching a good handful of fish in the 90cm range and lots of big fat 80cm+ fish.

And then throw in some saratoga, big mangrove Jacks, queenfish, fingermark and cobia and even a pretty sizeable longtail tuna Joel caught bottom fishing with his barra gear, rounded out 2 weeks full of laughs and entertainment mostly form the two said sons! 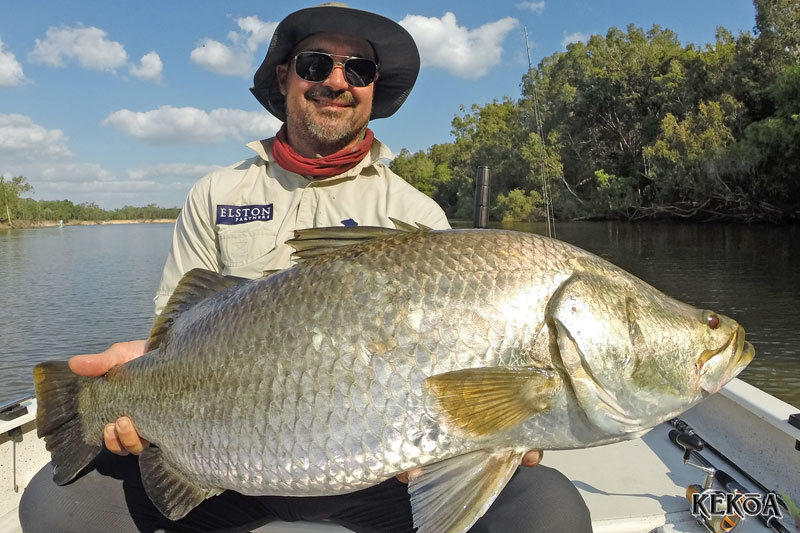 Grant, Peter (Pistol), Daryl, and Jim also returned again this year, this being their 3rd year onboard and had some pretty steady fishing.

The numbers weren’t quite like the the last couple years for them but catching between 20 and 50 barra a day isn’t to be sneezed at, especially when most of them are of legal size and lots in the 80cm+ range (and some of them being the fattest wild Barra you will ever catch – pic).

But it was 5 over 90cm for the week including a 102cm for Pistol Pete who was on fire for the week, and could do no wrong in the angling stakes.

This fish was only about 87cm but one of the fattest fish you would ever see. Grant could hardly get his hand around its tail! 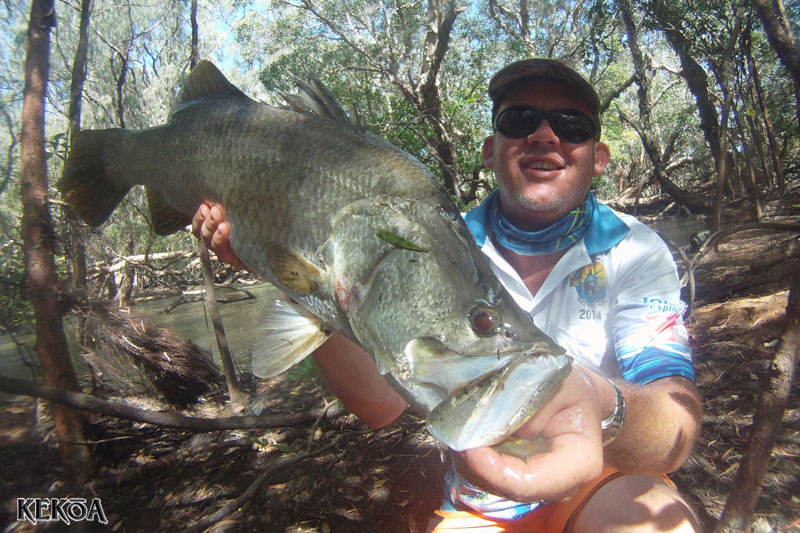 Origin week and the banana boys from Tully were back again, with Richard, Raymond, Cameron and newbie ‘Deadset’ (a world/Tully famous rap singer!) Richard had a bit of explaining to do right of the bat unpacking his rod tube a pair of male gstring underwear fell out for everybody to see. We were all unsure as how they got there, were they really Richard’s? Did some baggage handler plant them? Or did Cameron have something to do with it? I am thinking the latter.

The fishing hung in there for team Tully, picking away at them steady for the week. Both Donny and myself had some good number days with plenty of ‘fatties’ mixed in. As always it was friendly banter on who had the best lure for the week and bringing a tackle shop with them there were plenty to choose from. Donny took Cameron and Deadset on walk way up river and had mad session on 80cm fish eating lures at their feet catching some of these crackers in water not much bigger then your bath tub. 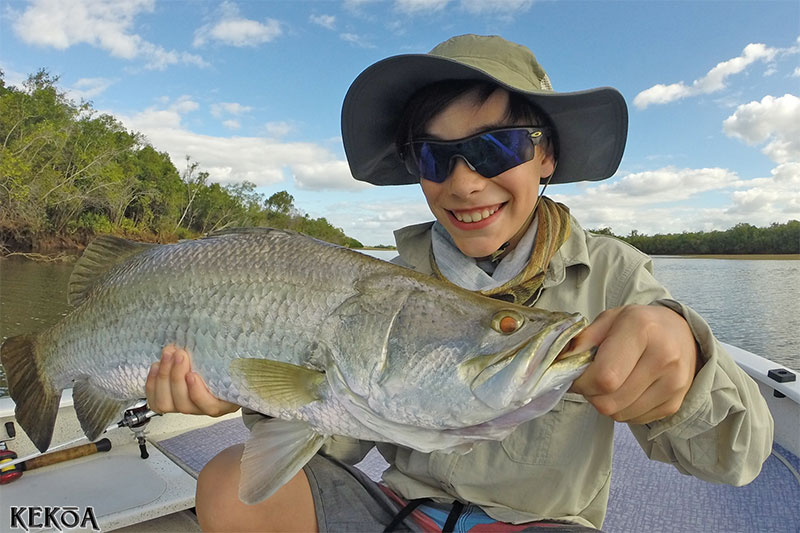 Our last trip for the season was a family affair with 3 generations of the Connor family. John, Dan, his young son Jacob (and honorary family-member Todd;-))

We started the trip in Weipa and ended up at Horn Island for drop off. We fished quite a few rivers on the way up the coast and managed to find, or more likely, let the big grouper at each anchorage find us. They provided hours of entertainment for Jacob who almost became obsessed with these wonderful creatures.

Hand feeding these big guys at the back of KEKOA at the end of each day is a great sight and often a salt water shower is on the cards as they ‘boof’ the fish frames from our hands.

Young Jacob at only 11 years of age was such a pleasure to have onboard and turned out to be a great liitle fisherman, casting like a champ and catching his barra all on his own – one day nailing 9 for the day by himself with a couple 75cm ones included.

So the lack of wet season did definitely did have its toll on the fishing, but that being said all our guest still had very good fishing for their trips …..except for Noel’s trip (hey Noel!) not sure what to say about that.  We all fished hard and put in big days at times to find them at times but that’s all part of the fun. Noel has been fishing long enough, and has had enough great fishing over the years to know that it’s not always like that.

That’s why I tell the guys “catching not much is as important as catching a lot” because it makes you think about your fishing, appreciate it when it is good, and forces you too look outside the box.

The KEKOA team would like to thank all our guest for another fantastic Gulf barramundi season in 2015. We are already counting down the days for next year!
Luke 😉