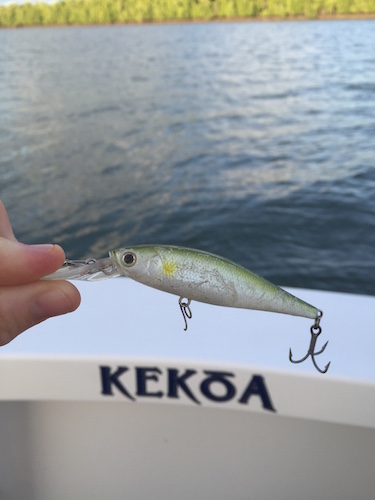 If you don’t want to get beaten by a complete barra fishing novice that is!

Scott, Richard and Mark fish together regularly but as their fourth was unable to make it this year, Dave from the UK became the special guest star.

On his first trip ever barra fishing he quickly stole the show. He scored the biggest for the trip at 110cm which was evidence that elephants eat peanuts (see pic right).

After a great surface fishing session catching a bunch of smaller to legal size fish the day before, and then getting right in the trees and pulling a real nice one out in another awesome session on the flats that morning, late in the afternoon on the way back to the boat, they stopped at a likely spot.  Luke marked a couple of nice looking fish and Dave threw in his already missing the front treble Lucky Craft.

After he hooked up, it was an anxious 15 minute fight on just the back hooks. But “great success”!

All in all, plenty of good fish to go around and good fun and a visit from a paddock (literally!) of what Ben said were false killers (pilots?) whales jumping in the wake beside the boat on the way back to Weipa stealing the show.

We also got one of our best sunrises of the year this trip too so I (Kelly) snuck out early for some pics.

Pictures from the week below.