[message_box]Read our fishing report archives for Gulf barramundi fishing reports from 2010, 2011, 2012 and 2013 (April through June) fishing north and south of Weipa with fishing tours encompassing the Skardon, Jackson, Ducie, Wenlock and Archer Rivers and some of the best barra fishing in the gulf! Or visit our photo galleries for photos of jumping barra and more.[/message_box]

A major highlight in 2010 was the addition of the Gulf of Capentaria to our charter destinations. These trips were a hit straight away and due to the immense popularity, we extended our seasons in the Gulf for 2011 and 2012 to 12 weeks. Now, we are already filling up for 2013!

If you are interested in some time at the top end and would like some more information please contact us now. We’d love to have you join us on board! 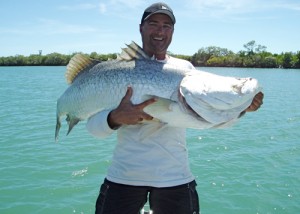 Weipa is known as the barramundi capital of Queensland and will be our launching pad into the more remote areas of the Gulf, as far as the McDonald, Jackson and Skardon rivers to the north and the Kendall and Holroyd Rivers to the south, including the mighty Wenlock, Ducie and Archer rivers. This time of year, coming after the wet, is a truly magical time to fish this region and the height of the Gulf barra season. And the weather is mostly perfect.

In addition to the fabulous barramundi fishing, the rivers produce an array of other sportfish including, Mangrove Jack, Salmon, Fingermark, Estuary Cod, Tarpon, not to mention tasty mud crabs. The nearby reefs and shoals are an amazing light tackle sport fishery, home to tuna, mackeral, queenfish and large mouth nannygai and fingermark. Walk the beaches targeting Golden and Giant Trevally and the elusive Permit. The sailfishing potential is also mostly unexplored.

Fly-in, fly-out from Weipa – only a one hour flight from Cairns. Arrive on board in the afternoon for an evening departure which puts you on the best spot for a start to fishing the very first morning.

With KEKOA 56 providing fully airconditioned luxurious comfort as mothership, barra fishing is from two 4 metre fiberglass CrossXCountry tenders. Maximum of 4 anglers as groups or on a per person basis.