Gulf of Carpentaria Barra Season 2014 – Oh what a feeling, Toyota!

Kekoa is currently fishing in the Gulf of Carpentaria for our barra season and will return to Cairns in late June. If you are interested in booking for our juvenile black marlin season, giant black marlin season (hurry,only one spot left!) or next year’s Gulf season, contact Kelly today.

Once again Townsville’s Mike Carney and his Toyota team have joined us on the river and its been another great weeks fishing with some great company. 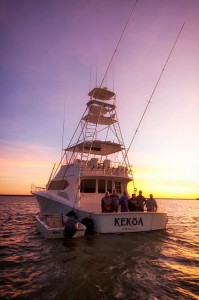 Mick started off the week much like he ended last year (a rod in two peices 😉 We won’t talk about that though will we Mick :-)). Not his happiest hour, but  he soon had the smile back on his face in the lead in the big fish stakes.  He didn’t hold it for long though because Arthur (after a slow and steady start) absolutely killed in on the last two days of fishing and couldn’t do anything wrong, including landing this beauty!

Mike had them all on numbers (there were a couple of triple figure days and once again Luke has been very impressed by the quality of the fish this year), and Cory just kept catching them in the background.

A great idea from Mick to record the team on the back deck enjoying a drink or two on the final day (left).
Thanks guys, see you next year!