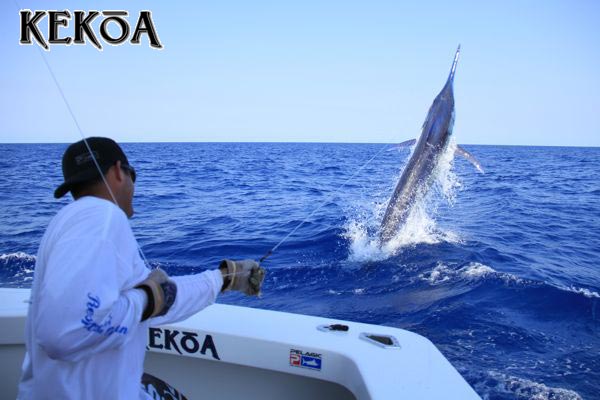 The team on KEKOA had a great day yesterday fishing Number 10 Ribbon Reef when “Big Fish Hass” Jason Hassett released his third fish over 1000lbs fishing on board KEKOA (his first on the new boat). After a big hit from an 800lb-er which unfortunately was missed, it was up to Bomber to put the team on the scoreboard for the day, which he did with a tough 600lb-er, his very first marlin. Less than an hour later, Jason was on strike when the big girl hit, and she didn’t make it easy for him either. 45 minutes of hard slog later, including 60lbs of drag with an added 15lbs of finger pressure on the spool late in the fight to bring her up again, and she was released in great condition. She had a smaller fish swimming with her for the entire fight as well.

Teaser trailer below. Once I’m over my bout with the lurgy (I have a bad head cold), I will get all of the footage together with the photos and put it all up.

We have had a late cancellation for the 2012 Lizard Island Black Marlin Classic. If you are interested in fishing,…