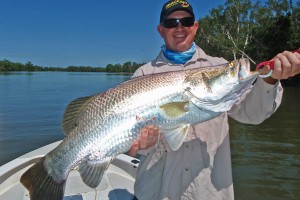 Barry with a nice 90cm barra 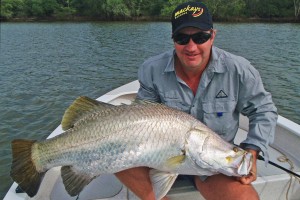 This weeks some more of the country’s biggest banana producers join us for a week on the Archer – and the Archer has been producing for them too!  “What a great day!” was the report from the first boys back upon their return yesterday.

When they came back into phone range, Capt. Luke had sent me a text.  “98”.  Short time later, “102”.  “Wow” I thought, some nice big fish!”  But my interpretation of the text was a little off. Actually, it was even better. They were up to 102 barramundi for the day just between Barry, Mick and Luke!!!  (And added one more on the way home to bring their total 103.)  Barry tells me that at least 85 percent of the fish were of legal size and that both he and Mick released fish in the 90cm range and lost a couple that would have been pushing a metre.

Shortly after James and Cameron fishing with Dan returned with big smiles (though not many pictures Dan! ;-)) James told me it was his best day barra fishing ever, which was soon echoed by the other boys. All up, between the two boats they released in excess of 160 barra.  Lets hope they can match that again today!

They boys also enjoyed a fish fry up on the sand upriver for lunch that got rave reviews and may be repeated later in the week.

On another note: We’re all showing our North Queensland roots scrambling for long sleeves this morning.  Is it winter already?!

Update from Day 2: Another great day on the water. Barry and Mick weren’t sure if they would be able to repeat their numbers from Day 1, but as the were approaching the 100 fish mark again at lunch time, it seemed like a shoo in! Although the bite slowed in the afternoon, they still made it with fish to spare – 105 for the three of them for the day. Barry says that at least 45 of those were 75cm plus fish. And not to forget, Mick’s 109cm monster on what the boys call the Mike Carney snag! Likewise, Cameron and James fishing with Dan scored some more real nice fish – but apparently they don’t stop to take photos… 😉

Update from Day 3: It was James day to shine with the naming of a new spot “Howies” after him.  Heading way upriver the boys found a  good spot to get out of the boats and wander and fish the banks. Then James found a honey hole of fish within casting distance on a snag under the shade of the trees. And they pulled fish after fish out of the snag.  Another great day on the water with James, Cameron and Dan finishing on top with about 80 barras, and Barry and Mick fishing with Luke, on about 60.

Final Update: Barry tells me that he and Mick finished with about 330 barras (all released expect for 10 kept for take home) and Cameron and James not far behind with about 280 which makes this a 600+ fish week! Awesome stuff. Although the fishing slowed down with a corresponding increase in boats on the water on the weekend, a great time was had by all. A big thank you from us to the guys for such wonderful company for the week – it was truly a pleasure!