Big Fish lost after seven hours at the Sea Mount! 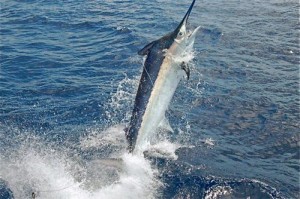 Shattered would be the best way to describe the feeling onboard KEKOA last night after losing the battle with a Big Girl estimated well over the mark of 1000lbs. Heading out to the Sea Mount after two days fishing Jenny Louise, the crew jumped a small fish off on the way out, but within an hour of arriving at the Sea Mount they hooked up to the monster about 2pm.

After a seven hour hard fought battle the fish won its right for freedom with the line breaking. Heart breaking as it may be, there may be another chance for the crew, with the Mount providing a hot bite yesterday for the boats in that area. With another days fishing there today, a change of fortune might be on the cards.

Brad Craft on the New Allure released two fish called over 1000lbs in the same area.

Onboard this week we have Jason Hassett and mate Tim who have ventured up north for their first heavy tackle charter with us and they have certainly been amonst the action since day one. On the first day they released two smaller fish from three bites and then followed that up with another release on Day 2 at Jenny Louise.

With two days remaining on their charter I’m sure they are keen to make amends
for last nights loss. The word from onboard is that they have captured some good footage of the seven hour battle and we hope to see that soon.