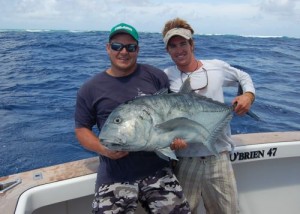 Brendan and Adam with another GT!

Seven days on KEKOA during Heavy tackle season is certainly is a great way to explore and enjoy Australia’s Great Barrier Reef, better still, if fishing is your game this amazing place is the ultimate Australian fishery!

Fortunately the weather for our trip was a lot better than all the fleet has had to endure previous and the last two days were simply stunning with variable winds. The fishing has well and truly been in the southern regions this year with Linden Bank providing the best of the Big Fish bites.

Here is a snapshot of the week that Scotty my long time fishing mate and I enjoyed with Capt. Luke and crewmen Geoff and Adam.

Day1 Linden Bank – Scotty hooked up 600lber and after short fight the fish became tail wrapped, unfortunately the fish was then set upon and lost to the sharks

Day2 Linden Bank – Captain Luke spotted a nice marlin tailing in the waves and managed to get the bite from what was called in at 800lbs. This girl had plenty of
fuel in the tank and burned up all of it in a tough fight that we eventually won. Luke’s boating prowess was put to the test and not to mention my angling ability to keep the belly out of the line whilst in hot pursuit at approximately 15 knots. Releasing this girl was a great team effort, while I must say Luke and KEKOA are simply an awesome match!

Day 6 Glamorous weather seen us head wide trolling lures without success but after switching to baits, a Blue Marlin took the scad and put on a line burning display that we all will not forget .Scotty performed admirably in the chair to successfully release the estimated 400lber.

Day7 The morning was spent getting hot bites from GT’s on the inside bommies and the glassed out water. Heading wide again to the same spot where we released the Blue Marlin seen us go 0-2 on our last day. The first completely messed up the bite and then a nice fish around the 700lb mark spat the bait up after a short fight.

All this plus other action and bites, too many to mention.

There is so much that happens on these charters, that you could write a short story about it, we fully enjoyed the week with the great crew Luke, Geoff and Adam onboard KEKOA

Thanks Guys, Cant Wait Til Next Year!